In a previous article I have given an introduction to Scrum. There, we have seen some principles of this Agile framework, pretty much a taster of what it is. In this article we will take a closer look at what it looks like when put into practice through a case study. Ready ? Let’s scrum !

Picture the scenario: The Director of a Bank’s loans’ department is requesting to build an application that will act as a registry of the real estate properties in mortgage loans.

– There is also the requirement of migration of existing data in Excel before going production.

This project is extremely urgent because the Bank’s Audit department has requested to have as soon as possible a persistent repository of the data instead of the Excel because of the risks it carries on safety and data loss. And yes, there will be sanctions for the bank if not done immediately. To complicate matters further, the Director has warned that there may be some time until all the exact details of the requirements have been drafted.

The Development Manager decides that the best option is to run the project with Scrum so that work can start immediately with whatever initial specs are available and it is not affected by delays in the delivery full requirements. At the same time, they will be able to have after a first iteration of development a potentially shippable product that may satisfy the Auditors.

IMPLEMENTATION
The Development Manager assigns the Scrum Master and the implementation team consisting of 4 core developers, 1 tester. The business Director assigns a Product Owner and also representatives of the end-users

Then the work begins as follows:

All these items and their particular specifications (user stories) form the Product Backlog which is continually reviewed and re-prioritized. 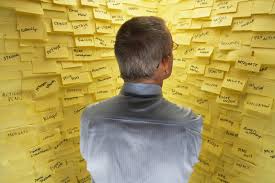 A Product Owner and user stories

(a) How long each development iteration (Sprint) will be

(b) What is the definition of a “done” product i.e. that they would consider a completed and potentially shippable product

(b) How many items they can commit that will be “done” within each Sprint. These items will form the Sprint Backlog

Since the team has worked together on similar projects in the past and taking into account the effort required for each task (using velocity) plus their availability for the next period, they estimate that:

(a) the project will be broken down into 3 Sprints, each 10 working days long

(c) Based on the expertise of the developers (2 seniors, 1 medium and 1 junior) it was decided to pair 1 senior and 1 junior (Pair Programming) throughout the course of the project. The tasks the pair would pick on the Task Board had the estimates doubled.

Pair Programming with backdrop of a Task Board 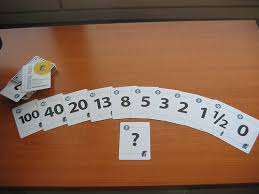 (e) A product would be “done” only if all features were completed and all xUnit tests were passed (the team would have Continuous Integration with builds produced  overnight and the they would have a Test-Driven Development approach, thus all features would have corresponding xUnit tests)

– Daily Stand-up meeting
Each member of the Development team states within 3 minutes maximum (15 minutes / 5 members = 3 minutes):
– Progress in the previous day
– The next steps
– Problems faced and what they need to resolve

The daily stand-up meetings always took place at 10am at the meeting room nearby and the Development Team authorized the Scrum Master to arrange for the booking of the room throughout this period. 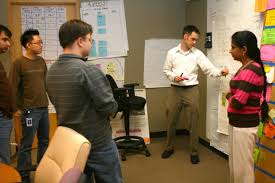 In case of problems in this project, the Scrum Master has been authorized by the Development Team to facilitate their resolution. For example, in Sprint 2, it emerged that it was impossible, based on the specifications, to automate the migration of 200,000 properties in the database due to some corrupted data. Following identification of this data the Scrum Master reviewed this with the Product Owner and the latter decided that they can be excluded.

Due to the problem just mentioned, the user story (3) was projected that it would not be completed in Sprint 2. The Development Team negotiated with the Product Owner to deliver the User Story (3) in Sprint 3 which had some time set aside to fit the implementation of any left-overs.

– Sprint Review Meeting (max 2 hours)
Given that a monthly Sprint has a max of 4 hour Sprint Review, our half-month Sprint had proportionally less i.e. 2 hours. During the demo of Sprint 1 it was decided to not roll out the “done” increment but following the review of Sprint 2 the Product Owner decided to roll out the completed work to production as a pilot which the Auditors approved.

Furthermore, in demo 1 and 2, the users suggested changes, particularly in terms of the search filters and fields in the data insertion form, which were managed to be incorporated in the next Sprint.

Given that a monthly Sprint has a max of 3 hour Sprint Retrospective, our half-month Sprint had proportionally less i.e. 1.5 hours. During the general discussion within the development team a number of points have been raised on how to improve the team efficiency. An example has been that in Sprint 1 retrospective, on of the developers mentioned that the specifications of the data insertion form could have been better worded to make it faster to implement them. The team authorised the Scrum Master to coordinated with the Product Owner to improve wording in the rest of the specifications.

CONCLUSION
In this article I attempted to give a taster of how Scrum can been applied in a real-case scenario. The benefits of this method in this case were:

I will not be tempted in this article to compare Scrum with Waterfall methodologies. I am planning to do this in an upcoming post. But, objectively speaking, it is a lightweight and yet robust framework, that needs few requirements to kick off and progress to the delivery of products unlike traditional methodologies with much less flexibility.

This site uses Akismet to reduce spam. Learn how your comment data is processed.